For my first quarterly return, I’ll lay out the basic plan for the future, and then tell a little story of hindsight.

Quarterly return posts will supplement my monthly Financial Dashboard, but with a different focus. While the Financial Dash mainly deals with my day-to-day, week-to-week goals, budgeting, the Quarterly Returns will cover investments in detail and look at my yearly targets. Here I will track purchases and sales, document my investment strategy, and discuss re-balancing and changes over time. Inevitably there will be some overlap, but I’ll try to minimise this.

Eventually the plan is to display some pretty graphs of exposure, increase over time etc. As I’m still developing my spreadsheets, for now I’ll just make a nice list.

As per the r/UKpersonalfinance flow chart, I’m working towards building an emergency fund (1). 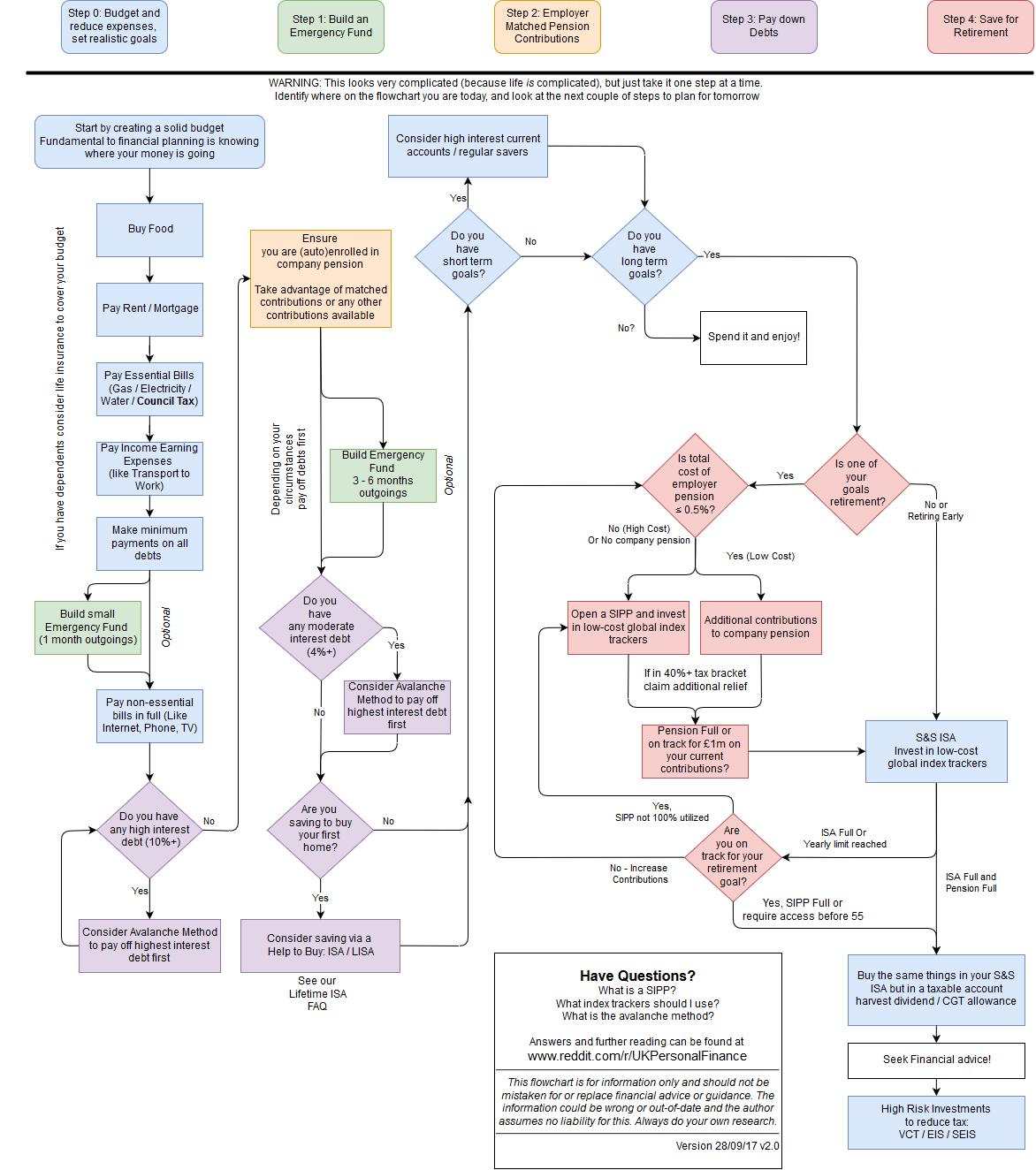 I currently have a month’s outgoings in our joint account, and working towards two months. I’m chipping away at this, but now I have a month’s worth tucked away (and completed some fairly massive life-costs) I’m going to target debts.

At the start of Q2 my short term debts were £2.5k to family and £4.3k on 0% interest credit cards. These are now £1,250 and £4.1k respectively. The aim is to bring my credit card debt down gradually, but as it’s at 0% for another 2 years I may indulge in some stoozing (2). I can also now close two redundant credit cards now I have no upcoming credit applications.

I’ve managed to reduce my living costs (see below), but an area for future work.

The target for Q3.

A Tale of Two Cities

Inspired by Ermine’s tale of a dumb property purchase, here’s mine (3). This is a story of opportunity cost, the British love affair with owning our own home, and how as a person sometimes buying is not the right thing to do.

As mentioned in my Musing On… Mortgages post, MrsFireShrink and I were lucky enough to purchase our own home in our mid-20s. There are plenty of reports and opinion pieces currently doing the rounds, detailing how a third of my generation “will never own a home”, how it’s a housing crisis and changes must be made to the broken market (4, 5, 6). Wind back to 2014, and those worries are starting to bubble to the surface, but not yet in the public consciousness.

In those heady, pre-Brexit, pre-coalition-of-the-contemptible days house prices are still rising. Property is still a sure thing. We’re over the 2008 wobble, Dave Cameron is in charge and ‘the city’ and financial markets are looking bullish. Every man and his dog is flipping the equity from their own home into a nice little BTL side-hustle, an earner for retirement, inheritance for the children. The market looks nice and rosy, house prices always go up, right…. right? (7): Enter stage-left MrsShrink (then MissFrugalStrongIndependentWoman) and I. We sat and planned our future together. I was living in work digs, 150 miles from MrsShrink. These were particularly miserable NHS digs, built after the war and updated when things broke, sometimes (for example see below) (8). Lying on my lumpy single bed as snow, rain and hail came through the single-pane aluminium-framed windows (which you couldn’t shut properly) I dreamt of a home to call my own. Heating that wasn’t on flat out, 24/7, even in midsummer. An oven that worked, A gas hob younger than me. A fridge lacking CFCs, etc.

The saving grace of these digs was that they were cheap. Really cheap. 90% of my earnings was paying off accumulated student credit card and overdraft debt, or sitting in our first, joint, savings account. MrsShrink and I knew nothing of investing, and to this day MrsShrink is fearful and does not trust the markets. Our plan saw me moving back to join MrsShrink in the city we had studied in, which we had both fallen in love with.

MrsShrink was equally frugal. She had moved in with a friend who had recently bought and was renovating a small terrace. While it was uninhabitable she was staying at his parents, paying a tiny rent, but not ideal accommodation. 6 months in and she was desperate for her own space.

With a small gift from MrsShrink’s mother we had enough for a deposit. The city we studied in was located in the South. A port city, bombed in WW2 and with high unemployment. Lively, cheap to live in, plenty going on and lots surrounding. Rows of identical, overengineered victorian terraces meant housing was around the national average despite being in the South. Early on we decided we wanted something old, with features, with potential but a manageable project.

We spent six months viewing 20+ houses. We watched perfect houses get snatched up by people outbidding us. We viewed some real shitholes, rotten floorboards and collapsing joists. We stretched a bit and leveraged to 90% LTV on 200k. We planned to be there until we had kids, so fixed for 5 years. In 2014, everyone predicted an interest rate rise.

Eventually we found a place. It was a bad house on a good street, with agents pushing for much more than it was worth. In an area of high demand it had been sat for a year. [Warning sign]. It was vast, full of old features and 10% over budget. It also stank of fags and had some qwalitee 90s additions. Faux plastic panelling and fibreboard partitions anyone? [Warning sign]. The electrics had recently been done (cheaply) as had the central heating (cheaply) [Warning sign].

All this didn’t matter. We were in love with it. We could own this big house on this lovely street, all our own! We’ll renovate it, start a family, make loadsa-cash.

We put down an offer for 5% under asking, which was accepted after a bit of haggling. We organised a full structural survey. This showed some damp and rot in the downstairs structure, so we went back to the vendors and knocked another 5% off. We were now on (just) budget. We weren’t fazed by this, every old house needs some work, and for houses where the vendor has been there over 10 years a survey may be the first time anyone looks for problems for a while.

The survey also stated that the walls were covered with thick wallpaper, as were the ceilings, and so the structure was impossible to examine. Fair enough said we. [Error]. As first time buyers we were a quick sale. Besides we were now desperate to be in. We wanted our house. [Error]. We completed within two months.

Walking back into the house for the first time, we were hit by a wall of fag-smell. Didn’t matter, we loved it. We held a party where we provided pizza and equipped all our mates with wallpaper stripping kit. The nicotine/tar ran out of the walls in rivulets. We all got contact high. Once we removed six layers of wallpaper and wood chip (spawn of the devil) the resultant 120-year old plaster was absolutely dead, falling off in chunks.

So it continued. I won’t document it all, but selected lowblows included:

Lots of the work I completed myself. The sleet helping to wash off six month old faeces was a particular joy. We dropped about £15k over three years completely renovating. I hate to think what it would cost in labour, as I did 10+ hours a week on it in addition to my 60 hour work week.

Three years into owning our home I was offered my dream job, one that I didn’t believe would ever happen, working with some of the top people in the world. Snag; it’s 150 miles away in another city. After discussions, I moved to pursue it, with MrsShrink following when she found work. We spent the following six months finishing the house to a high standard travelling the 150 miles at weekends. We never got to appreciate the fruits of our labour.

Facing financial pressure, paying rent and bills on one home and a mortgage and bills on an empty one, we put it on the market. We had to port our mortgage to avoid a hefty 5% early repayment charge. An asking price offer made within a week of listing fell through three months later, days before exchange. Another offer fell through a month later. We finally accepted an offer 10% under asking price six months later. We completed two months after that, exchanging on our new property on the same day.

Why am I telling this story? Through sweat, tears, blood and new grey hairs we made £15k net profit. About what the house would have gained through local market forces anyway. We have more equity in our new property and gained a lot of experience for the purchase of the current house:

Ultimately we learnt the hard way that early in life mobility for work can be a greater asset than equity. The British romanticism of owning our home hamstrung us and tied us to a financial obligation. As young professionals we could have been better served by considering our mobility as an asset. Don’t settle down until you really know you’re going to. There endeth the lesson for 20-somethings.

View all posts by TheFIREShrink